Iberia is awesome just because it is the only airline I know that holds your booking for up to 3 days before you have to pay for it! They obviously have flights to all the main cities in Spain, but usually run specials for Venice-Madrid and Venice-Barcelona.

Aside from having better service than RyanAir, EasyJet will get you to party destinations such as Berlin, Ibiza, Paris, Madrid, London and Rome for under $100! Of course, that is if you take only carry-on luggage and reserve in advance!

Meridiana leaves right out of Venice and takes you to Olbia and Cagliari (both in Sardinia) and Sharm el Sheikh (Egypt) for around 60-120 euros depending on the season. They also have direct flights from JFK to Palermo and Florence. 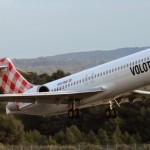