About Travel for Rookies:

Travel for Rookies was founded by Bianca Reyes, a recognized travel expert. Being raised in a South American household, her travels to Latin America began from a young age and upon obtaining a degree in psychology at the University of Virginia, she continued to travel on a regular basis, including as an event coordinator for foreign Ministers of Justice and Finance at the International Monetary Fund. While that gave her a glimpse of the world through the institution’s eyes, her contrasting global views and true passion for exploring and discovering other cultures pushed her leave the Fund and become a real estate agent. Being her own boss allowed her to take a year off, move to Venice, master the Italian language (in addition to Spanish), and travel to over five continents. Finally deciding to remain in Venice, her career as a marketing manager for an international booking site led to a better balance between her private and professional life. Venice “sucked her in” (as the locals say) and she has set down her anchor in one of the world’s most unique cities.

Bianca has been published and mentioned across the board sharing her travel expertise for esteemed companies such as the Examiner, AOL, Walletpop, HostelsClub.com, various city newspapers from LA to South Africa’s Mossel Bay, and radio shows such as “Travel Show Live” with Erik Hastings. After taking the plunge and leaving her “9 to 5”, she decided to join her two passions, budget travel and Venice, thus publishing, Venice for Rookies!

The Normal vs. Rookie Version 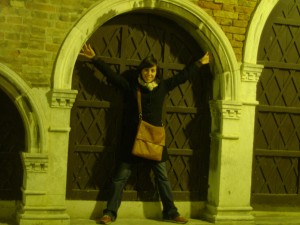 Travel for Rookies was founded by me, Bianca, on March 22, 2011 while  flying from Venice to Tenerife right after my third anniversary of taking  a “year off” and numerous friends telling me to share my insider  knowledge of what Venice has to offer.Since 1999, I had a long love affair with Italy, but since 2008, I eat,  breathe and live: VENICE! Speaking Italian and Spanish fluently helped  me make awesome friends (Venetian dialect is actually its own mix of  both of these languages) and really get to understand the intricacies of  Venetian daily life. My mission is to share the inside tips of how to drink  good wine, fine dine, party, travel around Italy and maybe even find  love (ok, that’s a stretch…but you never know!) with a simple budget plan and all the meanwhile “living as the Romans do”, in this case “as the Venetians do”. Having also worked for a large international booking site based in Venice, I have plenty of experience in the tourism industry and understand what visitors really want to see in just a few days. The magic combo was my scoping out bargains and knowing where the locals truly go, which results in a memorable and geniunely Italian experience. I went from being a Venice Rookie to a Venice expert and so can you!
Rookie Version:
TravelforRookies.com is based on the wisdom of a 30-something year old female named Bianca who likes the international good life in Venice while staying within a reasonably low budget. After hosting numerous friends and family in Venice and having worked for a well known booking site (HostelsClub.com) she started putting together itineraries which mixed history, culture and fun. This travel e-guide,Venice for Rookies, is meant to be a rookie-proof manual of how to live Venice to its fullest as the locals do at local prices!