Running on Water for More than Just Water

It’s not weird for Venice to have the recurring water theme, but this year, even the marathon held on October 25, 2015, will partially have this theme. The Venice marathon has distinguished itself as a major fundraising event for social campaigns such as “Run for Water – Run for Life” (a collaboration between the Venicemarathon Club and the Africa Mission Cooperation and Development, where the funds go to building more water wells and access to water for Ugandans), “Bambinigamba” which is a project for building artificial prostheses for children from Chad, Kosovo, Morocco, Moldova and Romania, and other international campaigns for poliomyelitis immunizations, to name a few. In other words, the 7,000 enrolled runners from all over the world will be running for more than just the experience and glory, but also to support the less fortunate. 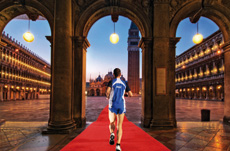 The marathon itself begins in the nearby town in the Veneto region called Stra and will continue for the official Olympic length of a marathon – 42km and 195m. The journey continues past many Palladian villas in the mainland to the Ponte della Libertà (which connects Venice-Mestre with the historic island), past the 160m-long floating bridge made of boats over the Grand Canal to St. Mark’s Square and over thirteen existing Venetian bridges (which are handicap-friendly, meaning with ramps), to the finishing line at Riva dei Sette Martiri where the finalists can enjoy the panoramic view of the lagoon.

Buona corsa! (Have a good run!)

One Response to Annual Venice Marathon