Venice Will Start Taxing Tourists to Save the City

Venice, destination city to over 60,000 tourists a month, is constantly searching for additional solutions to preserve the city and its tourism. The £3 billion flood barrier project named Moses consisting of 78 giant steel gates is not enough since it isn’t bound to be finished before 2014 and Venice is in danger of crumbling and drowing. The island continues to flood every winter season and some officials have thought of putting a cap on the number of tourists. While that sounds devastating, they came up with an interim solution starting next month, so you can still visit Venice.

What is this newly found restoration project?

It’s a fund-raising initiative charging short-stay visitors a tourist tax in order to fund a £20m restoration project planned by the local council to protect the city from sinking.

Sandro Simionato, Venice deputy mayor, defended the tax for La Serenissima as it is known, insisting that the city, which is a UNESCO World Heritage Site, was at risk.

Mr Simionato said: ‘This tax is a new and important opportunity for the city.

‘The fundamental objective, which will also involve tourists who visit and love Venice, is to save this unique city, which is precious and fragile.

‘The tax will help finance tourism, maintenance of cultural heritage sites, the environment, as well as public services.’

How will this be charged?

Starting August 24, 2011, the levy will be charged on a sliding scale, depending on the star rating of the hotel. 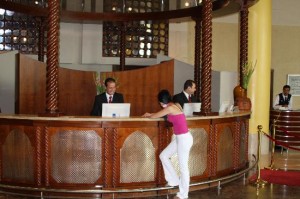 Checking in will cost you more.

Those staying on the neighboring islands and in Lido will have a slightly lower tax applied. On those islands, five star hotels will incur a charge of 4.50 euro per night. This rate falls by 70 per cent as the hotel rating drops and the tax lowers by half during the low season.

I guess guests used to staying in 5-star hotels really won’t care since they are use to paying over 700 euros a night, so what’s 5 more? But economy guests will notice, since euros don’t come cheap.

All out-of-towners staying at a hotel in Venice proper, Lido or any of the neighboring islands. Each person will be charged for the first five nights, meaning they are hitting the city break tourists the hardest. Children from age 11-16 will also be charged, but only 50 per cent of the levy.

Who’s exempt from paying the tax?

When to look out for the tax:

Peak times to watch out for: April through October, Christmas, Easter and the popular Venice Carnival in February.

Looking at the bright side, the Venice Council was thinking about charging tourists at the entry points as they arrived (airport, train terminals, etc.) but this was opted out for. Instead they decided to go with this similar scheme that was introduced in Rome earlier this year.